Ooooh first post! This is a momentous occasion for me; starting a record of my sewing, travelling and dressing up has been in my mind for a long time. If I could have thought of a blog name earlier then this would have happened ages ago…

A year ago I bought a WHOLE ROLL of silk burnout velvet for $20 – it is a beautiful Navy Blue with a large floral pattern. I was unable to pass up on an offer so good, despite already having a stash filled with fabric I had no planned use for.

Well earlier this week I realised that it would be perfect for a bias cut dress and I had a vision of using the pattern of this halter top (pictured below) for the bodice of a ’30s dress. I love the simplicity of this pattern and planned to add a long flowing slightly fishtailed skirt to turn it into an evening dress. Despite having a love of Art Deco, I have never attempted a 1930s dress before – so there’s a lot to learn!

Back view 1930s Peach Beach Pyjamas I designed and made 2015. Photographed By the beautiful Jacinda 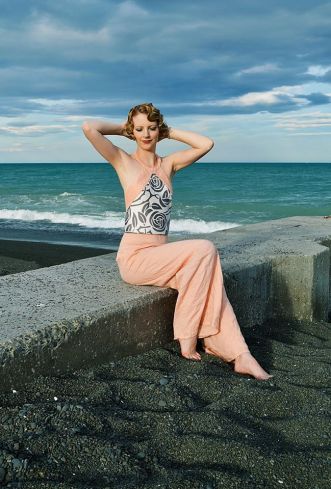 Front view 1930s Peach Beach Pyjamas I designed and made 2015. Photographed By the beautiful Jacinda

This image below right was what inspired me, it’s a fashion plate taken from James Laver’s book Taste and Fashion, however never having attempted 1930s before I wanted to do a little more research.

“No one, I think, has sufficiently emphasised the fact that the modes of the early nineteen-thirties were nearly all devised to be seen from behind… In a dance frock this has, of course, some justification. On the modern dance-floor the woman is clasped so tightly to the bosom of her partner that all the spectators are likely to see is the back of her dress. The concentration of the backs of dresses led to the strange result of bodices cut comparatively high in front and non-existent at the back… The bodice was reduced to a triangle of cloth… But this of course could only affect evening dresses and bathing costumes…” Laver, James, Taste and Fashion (revised edition 1946) page 110

I was pleased to realise that my unfounded design idea was in fact completely in keeping with the era – how to cut the skirt I had no real plan (aside from on the bias) – so I read through some of my other reference books:

“…the evening gowns of 1930 suddenly took the plunge and descended evenly to the ground, but with the reservation that the slip or underdress was still only knee-length in a great many examples when the dress was transparent… The generally fashionable evening gown reserved its fullness from the knee downwards, the gown fitting and outlining the legs from thigh to knee… The bottom edge was… over four yards in circumference though not more than 36 inches wide at the knee…” Brooke, Iris, English costume 1900-1950

In the end I settled on a skirt design from Janet Arnolds Patterns of Fashion 2, largely as the sketch below came with a pattern!

I drew up the pattern, roughly adjusted to my size, along with the bodice pattern I had already made for my Peach Beach Pyjamas. I didn’t bother toiling, partly because I knew the bodice pattern fit, and partly because I had a whole roll of fabric so there was room for recutting. As it turned out that was a good thing! The initial fitting featuring bodice and the upper skirt showed the upper skirt hem to be sitting well above my knees – and therefore not at all long enough!

So I added 15cm to the original length of Janet Arnold’s upper skirt pattern, recut and tried it on again for size. Being much happier with that, I pinned the lower half of the skirt in place as well. The results were far superior! I pranced around and felt svelte and sexy… just the right result!

Not bad for one evenings work 🙂

Now all I have to do is finish it!