Sometimes a fabric is purchased with a specific garment in mind, and it is made up as planned quite quickly. But for me that is regrettably rare…

This fabric you are about to hear about spent closer to 10 years in my stash… Growing up in the house that my grandmother had bought during the 1950s meant that there were always cupboards full of treasures. Old suitcases full of photographs, boxes full of tallow candles, and a trunk (referred to as ‘the coffin’) in the garage filled with bolts of cloth! One of those bolts was several metres of furnishing weight, golden-mustard coloured, striped, cotton brocade. For years it has sat in my stash, quietly waiting for its moment of glory. The longer it has waited, the more nervous I became that the moment I finally cut into it, its potential would be ruined!

But I was eventually brave, and cut a pattern for a cocoon coat which during the sewing process morphed into a kimono. This sort of thing does quite often happen, sometimes the fabric seems to choose its own design.

Of course (as you must be beginning to expect) the intention had been for a garment to add to my 1920s wardrobe; exoticism and orientalism were popular trends during the lead up to WWI which I wanted to explore more with my sewing. Paul Poiret had popularised Oriental designs and fabrics during the 1910s, themes which persisted throughout the ’20s. Discoveries such as the tomb of Tutankhamen in 1922 and the opening of the Forbidden City in 1925 ensured that interest in all things oriental and exotic continued.

So I decided that this fabric would work beautifully as a kimono/cocoon coat!

Only I needed to find a design which would complement the wide stripe pattern. I did a fair amount of ‘Pinterest research’ and found no examples of kimonos or cocoon coats with a wide stripe. So I cut a basic pattern based on some of these images below (sorry about the lack of credits for these) and proceeded to drape the details on the mannequin.

Below a couple of Kimono designs including pattern shapes which were useful for me when draping on the mannequin to get an idea of how some sleeves were created. 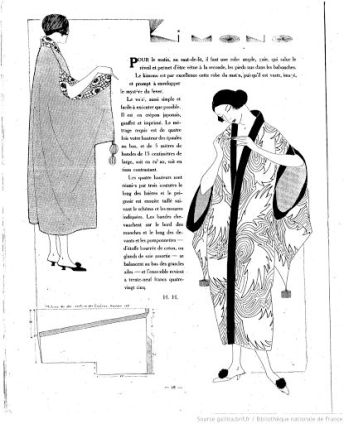 Eventually I settled on using the stripes as the main design, I sewed the matte stripe into a pleat running right up to the waistline from the hem – creating a wonderfully slim and shiny lower half which bursts into fullness and texture around the upper body.

Next I had to decide on the sleeves, my original sleeves were ridiculously long and impractical (see below image) I played around with turning them into pointy wizard sleeves but it was a bit too Dumbledore-y…

I ended up reducing the wizardy length of the sleeves and added more pleats along the top of the sleeve which pulled the cuff back from my wrist but still allowed the lower edge to billow.

Of course, I have glossed over the hours spent staring at the mannequin and parading in front of the mirror! The process above took about a month before I was able to decide on the sleeves and the pleating!

The neckline was finished with a simple shawl collar given body by a layer of horsehair canvas and felt. I own a proper Japanese Kimono which was of great help – the collar on that has weight and substance – which is why I chose such heavy materials for my interfacing.

I had found tassels in the exact right colour to match the fabric which worked beautifully on the end of each sleeve, but made me unhappy with the choice of white frog to close the front. Luckily I had a spare tassel which I could tear apart and turn into a matching frog!

And voilà it was finished! Its first outing was at my birthday party in December – where I had great fun dancing with it billowing about! It received plenty of attention and was tried on by several friends, it seems to fit and suit many different body types – something which I am very happy about! A great many people seem to think they couldn’t possibly dress ’20s the way I do, owing to their curves, but styles like this show that fashion of the era does not have to be exclusively for the slim and the boyish.

Having said all of that, of course I took no photos to prove my point 🙂

But this was another garment that got treated to a photoshoot with Stuart Attwood – so there’s plenty of images of me prancing around!

So, am I pleased I finally cut into this special bolt of cloth? YES.