A year ago I helped renovate a house. The exact age of the house is uncertain, however it likely dates to the late 1910s or early ’20s with some later alterations and additions. As someone who has a love of history, and particularly an appreciation for items which have survived to the present day, I was perhaps not always the most helpful renovation assistant. There were constant discussions over which original features needed to be kept, what was old and interesting to me was just old and tired to others. But what I found most thrilling was discovering unexpected hidden gems.

The lounge and a couple of bedrooms were carpeted with a sad, faded, threadbare green carpet which was definitely not staying. What we weren’t aware of was the loose lay linoleum underneath, and the newspapers below that!

A straight forward removal of carpet became a careful enterprise – with me watching like a hawk and instructing ‘woah! Watch out for that paper! Ooooh look at that advert! Wow these are all from 1948!’ I rescued as many papers as I could, many have holes from carpet tacks, some were too dirty and watermarked to be useful and others are missing corners. But luckily my long suffering father knows of my love for old things and humoured me. So now here I am with a stack of newspaper pages from various different NZ publications all from March 1948. They are filled with beautiful fashion adverts, interesting post war articles, and hilarious snippets of local news.

Part 1: the best of the ladies fashion adverts.

These newspapers offer an interesting glimpse into the available fashion choices Kiwi women had in 1948, the post war years marked the beginning of New Zealand fashion design, but the department stores certainly seem to be the dominant force! There were still strong influences from overseas designers and fashion capitals (some things never change). The advert below is blatant in its references to Paris and Dior – describing the garment as ‘a coat with the New Look that is sure and simple in every line’. Dior’s famous collection named by fashion journalists as  the ‘New Look’ had been shown for the first time a year earlier in Paris.

Although not a fashion capital in the same league as Paris, clearly Scottish Woven Wool also carried selling power. I love the colour names in the below Rendells department store advert: Loch Blue, Heather Pink, and Bracken Brown. Its making me doubly excited to be visiting Scotland again next month!

Another Department store, Milne and Choyce, this advert more subtly associating with Paris fashions and the ‘New Silhouette’.

And here is the only advert in the papers for a New Zealand designer! Bobby Angus was one of the ‘pioneering’ New Zealand fashion designers, the shop opened in 1948 – so this must be one of their very early adverts!

This next advert is in a bad state of repair, but with those sleeves and that hip detail I couldn’t resist sharing!

Another Rendells department store advert, this time for dresses in WX (womens extra) and OS (outsize) only, these dresses were designed for the larger sized lady (though how that compares to modern sizing I am unsure).

Has anyone heard of Allans before? They have some very cute blouses for Easter!

Then there are all the adverts for accessories and make up:

Rayon hose – nylons had been invented before 1948, but no mention of them amongst these adverts…I wonder if they were slow to arrive in NZ stores? 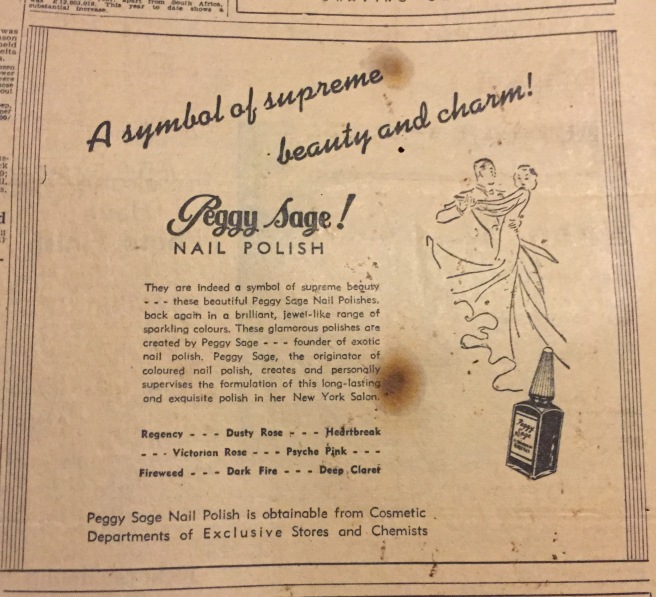 Strapless bras! Even I want one of these – they sound amazing:

‘There’s a “take-me-dancing” glamour in this lovely strapless bra, especially right for all off the shoulder styles that are this season’s fashion highlight. Minuet is as lovely to wear as it is to look at! No straps – – – no bones – – – no wires, its the cordtex arch that supports gently and firmly from above! Cordtex, the amazing material used in all Gothic bras never loses its shape or support.’

Lipstick. (And excitement that Smith and Caugheys still exists!)

So there we have it, everything the well dressed Auckland lady of 1948 could want, from fur coats, gloves and hats, to lipstick, cigarettes and stockings. Some things are clearly of the era – I would struggle to find an advert for fur coats in a modern NZ Herald, but others are almost word for word with their modern equivalents. It seems lipstick, stockings and chocolate are all still marketed in much the same way!

Maybe next time I’ll share the adverts for Menswear – there are far fewer – I guess that’s one thing that really hasn’t changed.